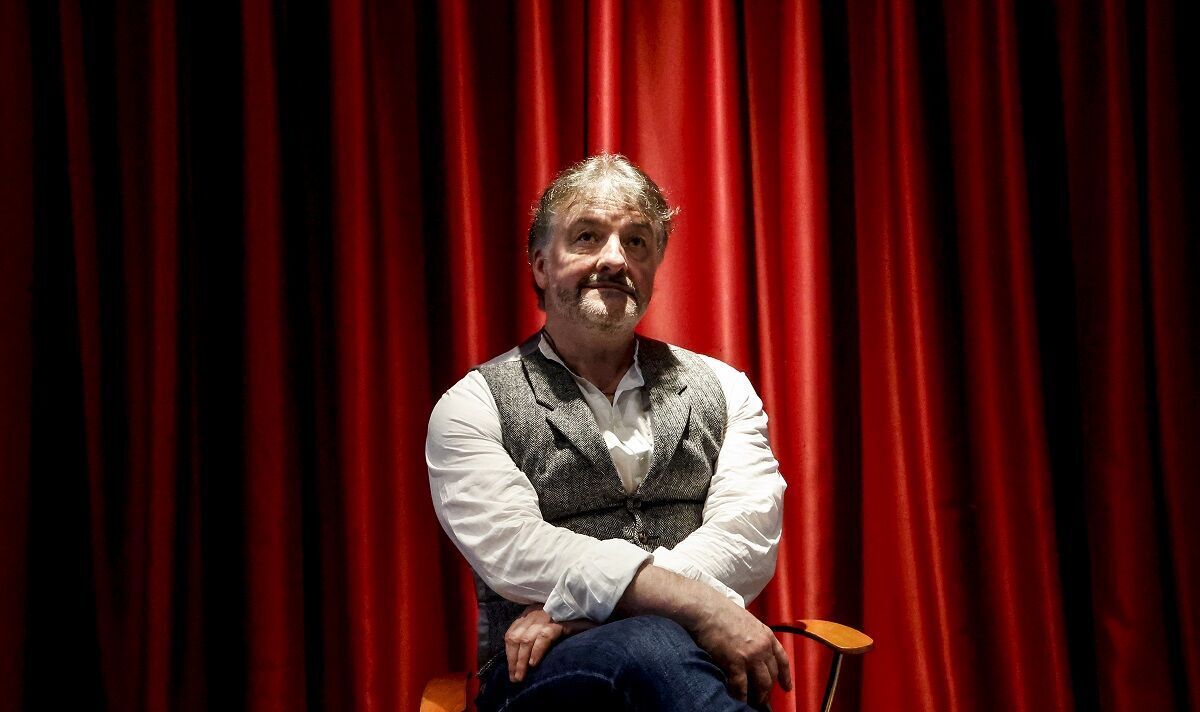 I stand in an ancient crypt beneath a venerable church in central Dublin before the mummified remains of several of its former parishioners. There is a strong scent of limestone, but the air under the stone vaulted roof is cool and dry, keeping the bodies well preserved.

Next to me is Dublin-born thriller writer John Connolly, who, as a former journalist, knows the importance of setting the scene – which is why he brought me to St Michan’s where we joined a group of American tourists.

Our guide to this historic hell, Peter Condell, whose name Connolly incidentally hijacked for a detective in his new novel, reveals that three years ago the crypt was broken into and thieves stole a preserved head .

Fortunately, the remains were later recovered, but the story bears the hallmarks of one of Connolly’s best-selling Charlie Parker mysteries, starring a private detective whose cases invariably border on downright creepy.

As for Peter, while he complains that his fictional counterpart is described, clearly with great affection, as looking like “an unmade bed in which tramps have slept”, he keeps them to himself as he takes us to the Sun.

Over lunch, Connolly admits he often borrows the names of friends for his books but, when it comes to villains, he skims through obituaries to make them as memorable as possible.

I speak to the author in his hometown, where he lives with his writing partner Jennifer Ridyard, ahead of the publication of his 20th Charlie Parker book, The Furies, and a rare special guest appearance next week at Theakston Old Pecular Crime Writing Festival in Harrogate.

Connolly, 54, is famous for his refreshing genre-defying books – fusing elements of police procedural, the supernatural and even horror to create a captivating and lyrical detective series that has won over millions of fans around the world.

However, not everyone was happy with his creative hybridization. “I couldn’t see any reason why I couldn’t merge two genres that I loved. I didn’t know it counted as painting outside the lines when I started, but it quickly became apparent that there was people who didn’t think my books should be in crime novel stores,” he explains.

“As a result, I have a bit of a bigoted readership. I’ve never sold in the kind of quantities of a Lee Child or James Patterson because my books are a bit weird.”

Ironically, until the 20th century condemned them as “genre fiction”, books like Frankenstein and Dracula which, like Connolly’s, blended the everyday with the fantastic, were both hugely popular and admired by critics. like great literature.

“Romantic fiction is also tricky but, at first, it was a way of questioning the role of women in society. If you read Jane Austen, it’s all about money and how are you you find your place when you are essentially a piece of furniture.

“Today, genre fiction is often tied to entertainment, something that will pass the time but not necessarily linger. But there’s no reason why it shouldn’t be as well-written as fiction. literary, has literary allusions, challenges readers and acknowledges outside influences.”

After leaving school, Connolly worked for the City Council for three years before cashing in his pension to study literature at Trinity College, Dublin.

“I had read a bit of detective fiction before I went to college. I read James Lee Burke in particular, I had read [Agatha] Christy, [Raymond] Chandler, but I was reading a lot more classic supernatural novels,” he says.

“When I was at Trinity there was a fledgling detective fiction course. There was a lot of skepticism; it wasn’t what an English literature course should be. For me, it was life changing. If I hadn’t taken that course, I wouldn’t have done it. I haven’t been a writer.”

Initially, however, Connolly turned to journalism, working for The Irish Times.

“I thought that was the only way to make a living writing. And I was frustrated. So I took the newspaper’s night shift because, unless the pope died, I wouldn’t have nothing to do. It was basically to hold the fort and make sure the lights were out at the end of the evening.

With time to write, he spent five years creating his first thriller. Every Dead Thing, published in 1999 when he was 30, allowed him to quit his job. The critically acclaimed book featured his cop-turned-PI Parker, whose wife and daughter are murdered by a serial killer. It was set in America, primarily in the state of Maine and its largest city, Portland, a place where Connolly had worked as a student.

“In Ireland at the time, there was a very narrow conception of what a writer should be: it was felt that you had to be engaged in Irish nature,” he smiles.

“I didn’t want to write about it. Irish people have always had a sense of physical escape to America or Australia or the UK. Putting the books in Maine – which is a bit like the west coast Ireland – was like saying, ‘I’m not going to stay here, I’m going to earn my living in another country.'”

While Every Dead Thing carried an air of unease, subsequent books took readers deeper into the supernatural as Parker battled increasingly demonic foes. “The supernatural was there from the start but not as pronounced,” says Connolly, who was raised Catholic, wears a Byzantine cross like his hero and admits to believing in some kind of higher power.

“Horror has always been off-putting, it’s never been trendy. It’s the only genre named after an emotion that most people associate with repulsion or something that’s going to be unpleasant.”

Much of the dark humor in the books comes from Parker’s sidekicks Angel and Louis, a burglar and hitman respectively, who are a gay couple.

“Books would be unreadable if there was no humor,” Connolly admits. “They’re not frivolous, but you have to tone it down. Ultimately, I believe good people taking action will change the world.

“I’m not saying it’s all about an arc, but there’s this beautiful quote from Edmund Burke, ‘All it takes for evil to triumph is for good men to do nothing’. My novels are about that a lot. Yes, the world is awful, but the worst you can do is do nothing.”

Connolly – who romanticized the life of Golden Age movie star Stan Laurel in his 2017 book It – adds: “Angel and Louis are also a way of writing about a particular type of male affection. Laurel and Hardy were the same. They had this amazing friendship. They were very different but learned to love each other.”

Although not a stereotypical Irish writer, Connolly realizes that his roots have given his books their unique “Old World” flavor despite his American background.

“The things I was trying to escape from – this fascination with the supernatural, folklore and folk tales – are very European. I now see them as central to my books.”

His working methods, which involve visiting places he wants to write about as well as extensive research, are, according to him, the result of an obsessive-compulsive disorder.

“When I was young I suffered from massive OCD, it was really debilitating; banging my head against the wall a number of times, or not being able to fall asleep without touching things. If I have today, I transferred it to work.

“Early on, I found it made supernatural things more plausible if people had a hard time separating fact from fiction.” Parker’s room,

The Great Lost Bear in Portland is real, as is Vienna’s Nameless Cemetery, created for anonymous Danube drowning victims, and the Sedlec Ossuary in the Czech Republic, a huge chapel containing tens of thousands of skeletons, many arranged to form decorations.

“It’s a huge bone dump and a guy comes over and says, ‘I could make a chandelier out of it’ and rather than locking it up, they say, ‘Go ahead’.”

Connolly’s villains are gloriously grotesque, morally corrupt within and ruined without, their evil rotting their bodies.

“I loved Ian Fleming and I loved his villains. He realized that 007 had to work on a proper epic canvas and the villains had to be part of it,” says the author, who also hosts a weekly show on Irish radio. .

“Once, when I interviewed James Lee Burke, he said he wondered if there were people so morally corrupt that their evil found physical expression.

“It would be great if that were true, you could just jail all the ugly people and the world would be a safer place.” His new novel, Les Furies, is really two in one. The first, The Strange Sisters, came out of the pandemic.

What’s going on where you live? Find out by adding your postal code or visit InYourArea

“When the first lockdown happened we were all freaking out it was scary. I thought most people would be looking at their phones for news. As an experience I thought I would write a chapter by day and give it to people to read on their phones.

“When I came to review it, the chapters were too short so I spent a year rewriting it. Then I had the idea for a second novel, Les Furies, and they tied together, the two stories of men underestimating the intelligence and power of women.”

COVID provided a suitably ominous backdrop to the storylines, involving the hunt for a stolen coin that might be possessed and a nasty case of blackmail, respectively.

Connolly is currently in talks with a big Hollywood star he can’t name to do a TV series based on his books, but he’s skeptical it will ever come to fruition. “The books are just too weird,” he laughs.

In the meantime, he is looking forward to visiting Yorkshire next week to launch his new book in Harrogate.

“One of the things that gives you confidence in people is going to a bookstore or a festival and seeing a lot of people there discussing something they have in common,” adds- he, “I work with prisoners quite a bit and never underestimate the value of escape.

“That’s what Covid taught us; we were all stuck in houses, sometimes with people we didn’t like very much, and picking up a book to escape to a happier place was a beautiful thing to do. .Reality is a nice place to visit? but you wouldn’t want to live there.”