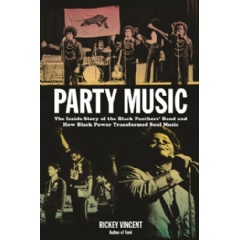 Music has been a powerful tool for black Americans since time immemorial. “Party Music: The Inside Story of the Black Panther Band and How Black Power Transformed Soul Music” by Rickey Vincent connects the history of black activism and black music, drawing attention to both. The informative book will be presented at the New York Library Association 2022 Annual Conference and Trade Show on November 3-4, 2022, at the Saratoga Springs City Center at 522 Broadway, Saratoga Springs, NY 12866.

“Party Music” is a unique examination of the official Black Panther Party R&B group based in Oakland, California, and the history of soul music during the Black Power movement from 1969 to 1971. The power of music doesn’t stop at entertainment of his listeners. For most of history it has been used as a means of change. For example, southern slaves of the pre-war period secretly planned their escape to freedom by singing spirituals.

Rickey Vincent demonstrates in his book how the streets of black America have been affected by the Black Power Movement. In addition to spotlighting the Lumpen, a funk band from the Black Panthers, his book also chronicles the aspirations, struggles, victories and failures of a generation determined to make their voices heard during one of the world’s most volatile times. from America.

The book delves into the soul of the Black Power Movement by humanizing the black revolutionaries of the time and putting faces to the revolution. Anyone who recognizes the transformative powers of revolutionary leaders but cannot find their names in civil rights history books should read “Party music”.

Readers curious about how black power-era leaders dreamed up their bold visions can own a copy of Vincent’s book at the NYLA 2022 Annual Conference and Trade Show at ReadersMagnet Exhibit Booth 33-34.

Learn more about Rickey Vincent and his book by visiting his website: www.rickeyvincent.com.

Order a copy of “Party Music: The Inside Story of the Black Panther Band and How Black Power Transformed Soul Music” by Rickey Vincent, now available on Amazon.

“Party Music: The Inside Story of the Black Panther Band and How Black Power Transformed Soul Music”

Author
Rickey Vincent is an award-winning author, radio host and speaker. He grew up in Berkeley, California in the 70s when funky music was born and revolutionary politics flourished. Her passion for teaching black music began after studying black music history with Professor Olly Wilson. Rickey earned his doctorate in ethnic studies at UC Berkeley in 2008

In addition to writing, Rickey Vincent hosts The History of Funky on KPFA radio in Berkeley. He is also an associate professor of critical ethnic studies at the California College of the Arts in San Francisco. Rickey’s studies have allowed him to explore a wide range of teaching methodologies. Consequently, he also lectures at UC Berkeley and teaches courses on black music history and social movements. Rickey Vincent conceptualized and developed “Hip Hop Workshop”, a new course adapted from the College of Ethnic Studies at Berkeley.

This news content may be incorporated into any legitimate news gathering and publishing effort. Linking is allowed.

Here are the winners of the 2022 Kirkus Prize. ‹ Literary Center