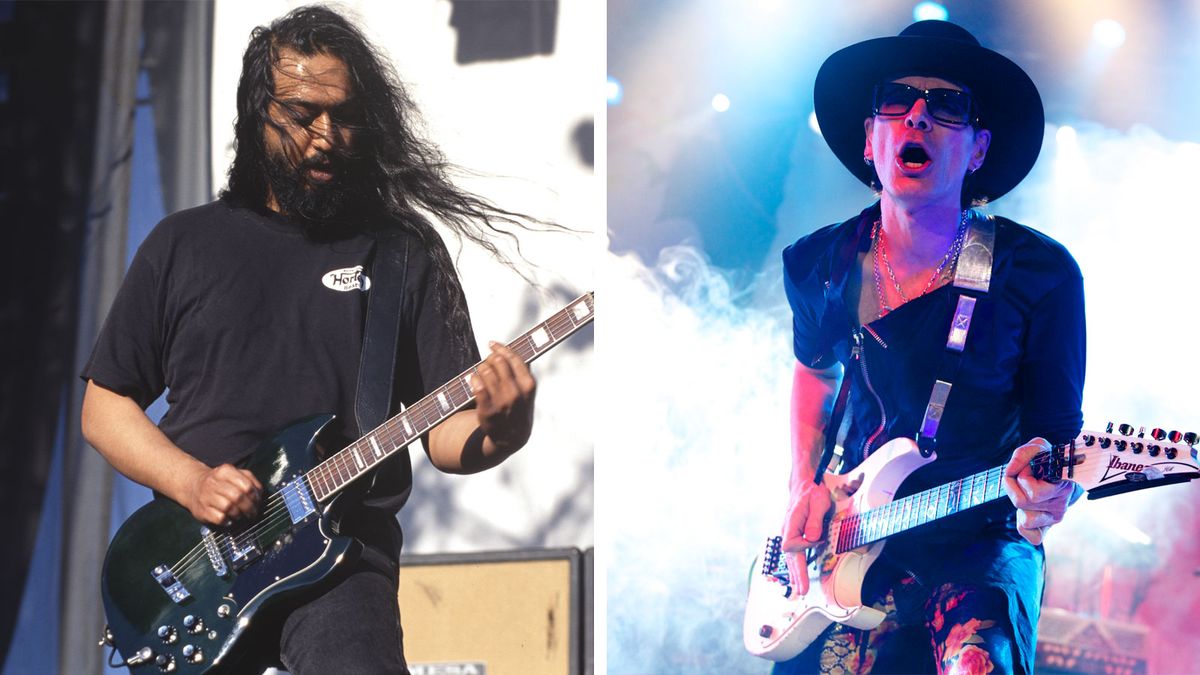 Iconic guitar gear is a new book by guitar world Greg Prato who details the tools of the trade of famous guitarists – and you can read exclusive excerpts from Steve Vai, Soundgarden’s Kim Thayil and Jeff Beck below.

The book also takes aim at a list of amazing bass players, including Billy Sheehan, Les Claypool and Mike Watt, to name a small sampling.

Prato – who has already written books, including Grunge Is Dead: The Oral History of Seattle Rock Music and MTV Ruled the World: The Early Years of the Music Video – drew on a wide variety of research for the book, including numerous interviews with guitarists themselves, alongside technicians, tutors and other tonal authorities.

Check out our exclusive clips on Kim Thayil, Steve Vai and Jeff Beck below and order your copy of Iconic guitar gear through Amazon (opens in a new tab) in Kindle, hardcover and paperback formats.

“I’ve had [my Guild S-100 Deluxe] when i was 18 in a used guitar store [in Chicago]. It was affordable, and I sat there and played songs I had written on this guitar – and found it so much easier to play than the Strat copycat guitar I had.

“It was much easier to play than my acoustic guitar. And I was looking to buy an electric guitar – I had worked all summer and saved up some money. Les Pauls were more expensive and Strats – they were all $500-600 back then. And this Guild S-100 was like, 250 bucks or something. Used. I was like, ‘Hey… I get that. I can afford it and I can play my songs on it without difficulty.

“And as I learned more about guitar playing and various factors of the instrument – from the action, the frets, the bridge, the nut, the pickups – I came came to develop my way of playing with my learning this guitar. So it kind of married together in some ways.

“I learned not to be afraid of noises or incidental things that you might do as a guitarist – because Hendrix did feedback, the Velvet Underground did feedback. And the noise and release that I learned from MC5, and the noise is incorporated into Pere Ubu.

“My guitar made weird noises and could do weird things that my other friends’ guitars couldn’t. And I thought, ‘I don’t have to avoid them. I don’t have to be afraid of those. And Daniel Ash comes in, and I’m like, ‘My guitar can do some of these things! I love these things! And I stuck to it.

“Because I was playing other guitars and it was like, ‘Hey…the action is different. The neck is a little too wide. I can’t do that. I can’t bend the strings above the nut. I can’t bend the strings under the bridge. There’s no feedback that easily. And its feedback is hard to control. I don’t want to play this Strat – its feedback is just a scream weird. I love the feedback I get from my Guild S-100 Deluxe. So I just stuck with that.

Steve Vai on his Charvel Strat aka “The Green Meanie”

“My first real guitar was a Strat. I loved it, but it didn’t really sound like I liked. And when I joined Alcatrazz, I wanted a bigger sound and needed more options on an instrument.

“So I went to Grover Jackson, and he hooked me up. Besides giving me some of his really wonderful Jackson guitars – which I loved, because they were the only ones I could find that had 24 frets and a whammy bar – he gave me a Charvel sunburst.

“I don’t even know the model or anything. But it was the Super Strat kind of thing – with the humbuckers. And once I got it, I was with Alcatrazz and it was great. He had the sound, he had the feel. And at the time, my technician, Patrick Francis – “Elwood” – he was a very colorful guy and he liked to do things on the instrument [Francis would later join ZZ Top as their bassist]. And I said to him, ‘Go ahead.’

“He had a lot of fun painting it green and putting stickers on it and stuff. At the time, my palm rested on the body of the guitar. And some of these guitars the tailpiece was a little high so the strings were high so the little pad [that was added to the body of the guitar] helped me choose more evenly. But it became my main focus. I used it a lot on these records afterwards – Alcatrazz, Dave Roth, passion and war. And then it was removed.

“Jeff Beck also alternated a lot of Les Pauls – as well as the Strat. The famous Strat that’s been stripped to the core – you can see when he plays with the band on Raw and ready. And there are TV depictions of that – so you can actually see that guitar.

“It’s probably the Strat he had on Beck Ola, and he just kept playing. I believe he played it with Beck, Bogert & Appice, and I think he played it in his early fusion phase – when he started playing with people like Jan Hammer and making Step by step and this period.

“Also at that time he had a certain Les Paul that had been put together by Seymour Duncan – which looked black, but it was actually a dark brown oxblood-colored Les Paul. [spotted on the cover of Blow by Blow]. It’s a conversion of an early 50s model – it’s not a Standard – but it has humbucking pickups, I believe, and Seymour Duncan made them.

“So, as you can see on Wired, he had a different Strat – a white Strat. So I think he alternated between this stripped down Strat and the white Strat. And I know white Strats have always attracted…it might be Hendrix, but Jeff still uses one now. When you watch current videos of Jeff, you see him with a white Jeff Beck Strat. So this Strat period probably dates back to 1969/’70.

“Plus, he also sometimes used the Teles – like you’re watching the video for people are getting ready, he shows it with a Tele. A converted Tele… but it’s still a Tele. And I think it was also a Seymour Duncan thing – he had a model that had a humbucker in it. So those are the three ‘flows’ he had.