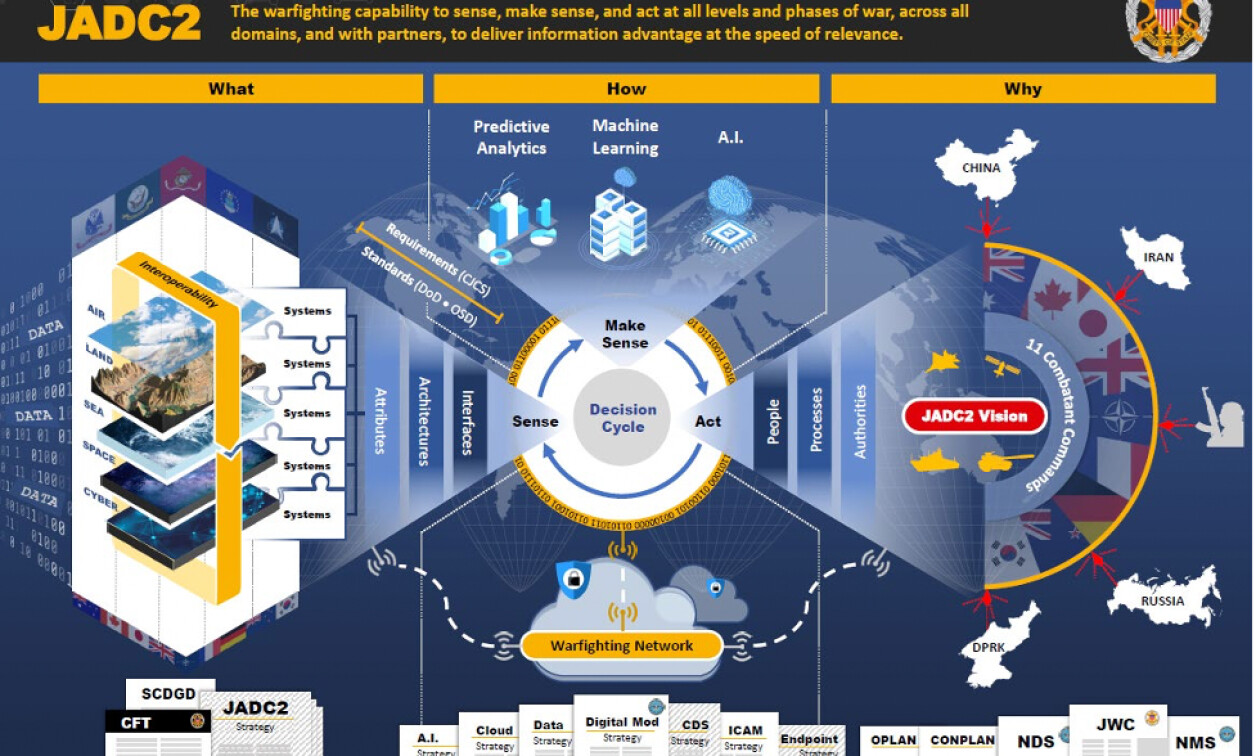 BLOG ON THE EVOLUTION OF WAR. If you’ve been an avid reader of these Kill Web articles, you know that the military has connected its sensors and weapons together in a tactical network as part of its IBCS (Integrated Battle Command System) initiative. The Navy has secretly connected its ships and planes to its Cooperative Engagement Capability (CEC) program. The same goes for Air Force aircraft under their ABMS (Advanced Battle Management System) initiative and Space Force satellites (SF-ABMS).

JADC2 (Joint All Domain Command and Control) is the Pentagon’s vision of how each of the services’ sensors and weapons connect into a single network (the Kill Web). Keep in mind that many of each service’s platforms were never designed to talk to each other, let alone talk to another service’s platforms. The JADC2-CFT (cross-functional team), made up of representatives from each service, had to iron out the technical differences and come up with common specifications. But the CFT does not have the power to dictate a solution, so things are not going well.

Recently, the Secretary of the Air Force raised concerns that each of the services were heading in different directions as they built their service-specific tactical networks. He recommended that the Pentagon’s CDAO (Chief Digital and Artificial Intelligence Officer) be given control of JADC2, to bring all the services together. If it chooses a specific data structure and packet format for all data flowing over the network, it could ruffle some brass feathers and upend each department’s budgets and egos.

A complete overhaul of each platform’s communications systems, considering all the old legacy platforms in the field of each service, could mean removing all those older radios and communications links and installing new material. It also means new software, to comply with all the new data standards. It also means big expenses for each department, not covered by their current budget allocations. And that means moving money from ongoing projects to comply with JADC2 requirements.

To read more blogs on the evolution of warfare by Ray Alderman, click here.

One possible solution is to leave all old proprietary communication links in legacy platforms and create a black box, which can translate these old protocols into a common JADC2 protocol. It’s called glue, and it’s been done before by the Air Force. As you know from previous articles here, the F-22 fighter cannot directly share radar imagery and targeting data with the new F-35. The F-22 computers are older and the software is in spaghetti code. F-35 computers are newer and the code is more modular. This means that a third aircraft, with a black box, must fly close to the F-22s and F-35s, and translate the F-22s’ Multifunction Advanced Data Link (MADL) messages into Intra-flight Data Link (IFDL) messages. ) of the F-22s. and vice versa. They did this in 2021 in Project Hydra, using a U-2 as the third aircraft carrying the translation box and antennas. So each service could be required to put black boxes and translation software on some of their platforms, to connect their old weapons and sensors to the Kill Web.

All of this data will flow across the Kill Web, from all of these sources, using different data structures, packet formats, and radio frequencies, and it must be processed into targets. This means that all this data has to go to a tactical cloud of servers somewhere, shared by all services. Then targets can be identified and coordinates pushed to the appropriate weapons and fired in seconds. This means the military could take control of missiles on a navy ship and fire them at an approaching enemy tank column… without asking permission. It’s a relationship the services have never had in previous wars and violates a host of weapons officer fire control procedures in the various services. Thus, there are well-defined, entrenched age-old doctrines that must change in the services. Many walls need to be torn down for JADC2 to create the Kill Web and function as the Pentagon intends.

Also consider that with all of this data traversing the Kill Web network, it must be encrypted so that the enemy cannot intercept and understand our strategy, operations, and tactics. Additionally, some of the data may be highly classified, not seen by the average soldier in the field or by allies who may have their platforms connected to our Kill Web. Exposure may reveal intelligence sources and methods that are highly guarded intelligence secrets. And, the entire network must be resistant to enemy jamming and cyberattacks by the enemy. Finally, the network will carry strategic, operational and tactical information. These are different levels of traffic for the commanders of the different units in the field. Army soldiers, dodging bullets while crawling between trenches on a battlefield, do not need to see urgent messages from a navy ship sitting offshore signaling that they have no more of lobster in the officers’ mess.

Let’s move to another level of JADC2. Inside these tactical cloud servers, in their memory, is a topographic map of the war zone. All of our sensors and weapons are constantly updating their position, speed, direction and weapon load on this map in real time. As sensor data finds and identifies enemy targets, those targets are assigned to the closest suitable weapon using AI algorithms (such as emergent coordination, “greedy shooter” , hierarchical coordination, centralized coordination or coordination by consensus… all covered in previous articles). This is done in seconds and weapons from any Kill Web platform are fired by AI algorithms (like Rainmaker, Prometheus, Firestorm and Shot). These have also been covered in previous articles. Targets are found by AI algorithms (not intelligence officers) and weapons are fired by AI algorithms (not weapons officers). This process makes some people in the departments nervous, but that’s how JADC2 is ultimately meant to work.

About a year ago, JADC2 tabletop exercises were conducted to see which links worked (GIDE-1, 2 and 3). The Army’s upcoming “Project Convergence-2022” exercises will include platforms from the various services as well as some platforms from our allies. This will give us a better idea of ​​the progress made on JADC2, despite the issues noted above. And this exercise will lead to another scenario. Imagine the US military taking control of missiles at a British or French warship offshore, and firing those missiles at a column of approaching enemy tanks. How will our allies’ platforms and weapons be integrated into JADC2? ?

In March this year, the Deputy Secretary of Defense signed the classified JADC2 Implementation Plan. It contains resource requirements, milestones and action plans. The unclassified version has eight pages and you can read it on the web. It lacks detail and doesn’t seem to have any bite. We’ll have to wait and see if CDAO takes over JADC2, what authority it has to put things together, and what the Army does with it later this year in the PC-22 exercises. There is not much data on the operation of JADC2 at this time. What’s out there is how it’s supposed to work. Remember that JADC2 is the physical implementation of the 5F Kill Web model: find (identify), fix (track), shoot, terminate, and comment. And this whole sequence must take place in a few seconds.

There are many other things about JADC2 that we have covered in previous articles such as: What if the tactical cloud servers go down in combat? This requires the 3-2-1-1-0 backup plan, so servers come back quickly with a reliable COP (Common Operating Picture) for commanders in the field. There is also zero-trust multi-factor authentication, for platforms that connect to the Kill Web. For cybersecurity reasons, sensors and weapons cannot access the Kill Web like logging into your Amazon account. JADC2 is very complex on several levels.

Next time we’ll see how James Joyce’s novel “Ulysses” became a basis for cryptanalysis and how it also became a tool for communicating with extraterrestrial aliens (if they ever show up). Although it is considered a masterpiece, many people who were forced to read this book in college consider it a hideous form of literary torture. Due to the severe levels of incomprehensibility and boredom this novel mercilessly inflicts on the reader, you should be required to prove you are in the care of a licensed neurologist just to check it out at the library. Harvard linguist George Kingsley Zipf had the same reaction when he read it in the late 1940s, so he delved into the 730 pages of “Ulysses” to find something, anything, from value in the novel. What he found was purely mathematical, not literary. I can say all of this safely because English literature majors rarely read my articles on the Kill Web. They are busy reading “Ulysses” and slowly go into a literature-induced coma.