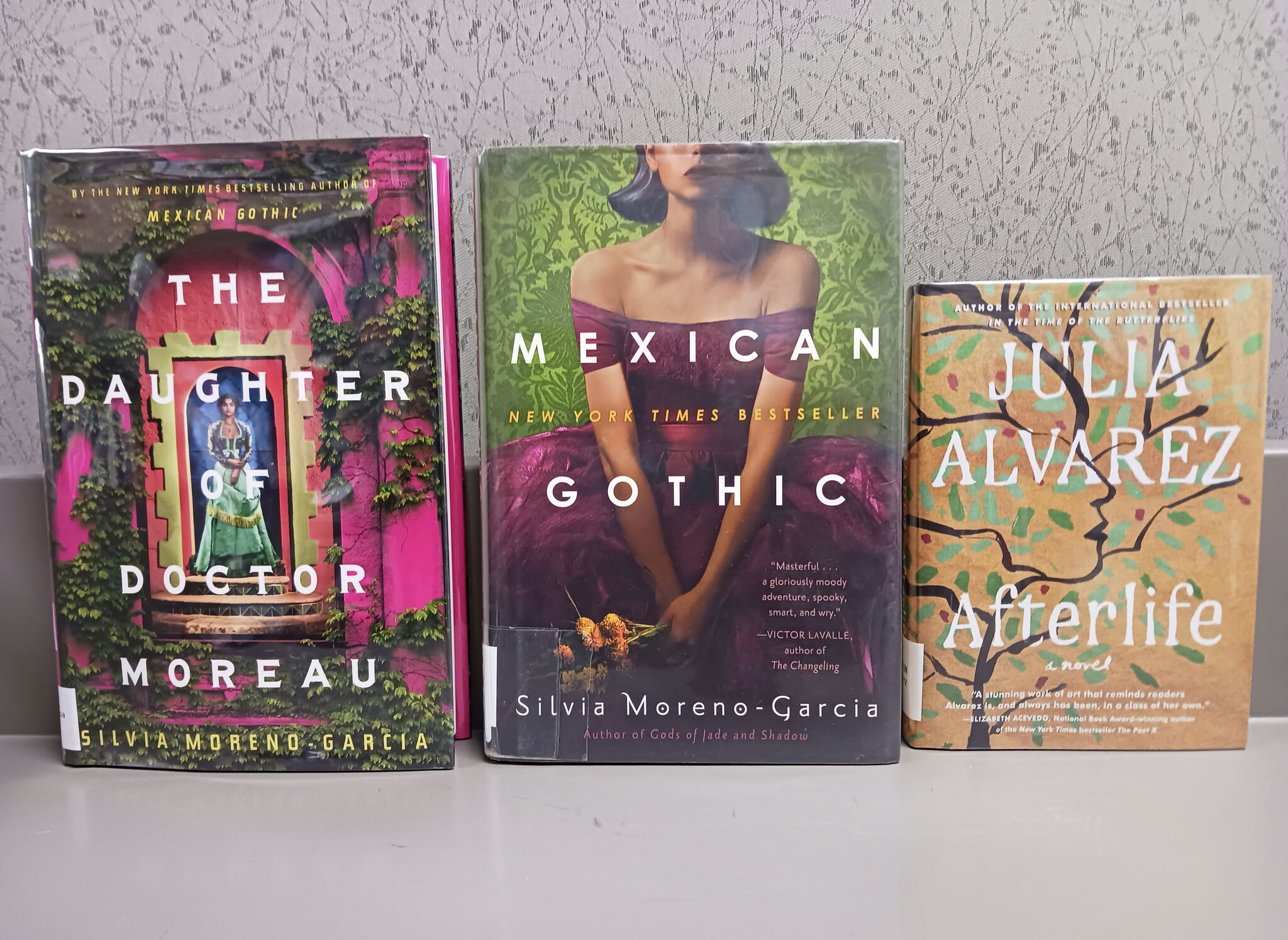 Hispanic Heritage Month is celebrated from September 15 to October 14 and honors the history and culture of generations of people.

These titles highlight the contributions and influence of artists, authors, actors, scientists and others. The Manistee County Library is delighted to share the talents of these individuals through various titles included below.

• After moving several times, Frank is happy that his family has finally chosen a forever home! The lighthouse they’re renovating is spooky, and when Frank meets a girl with memory problems, he begins to wonder if their island home is haunted. When his new friend tells him about a curse on the island, Frank tries to help him. But will he lose his first real friend in the process in “The Curse on Spectacle Key” by Chantel Acevedo.

• When his grandfather is injured while diving, Fin decides to continue their treasure hunt. Her father tries to help her but worries about Fin’s safety. As he rushes to find the treasure, Fin begins to realize that there are many types of treasure, some more valuable than others in SA Rodriguez’s “Treasure Tracks”.

• Maggie discovers that fitting in and finding herself is harder than she thought. Unsure of herself, she participates in various extracurricular activities and finds herself exhausted and more confused than ever. “Join the Club, Maggie Diaz” by Pablo Cartaya finds Maggie looking for help in unexpected places.

• Mindfulness is the theme of “Sometimes All I Need Is Me” by Juliana Perdomo. Meet a young girl who learned to comfort herself in difficult situations with reminders of her safe and comfortable world.

• Honoring her late grandfather is very important to Daniela and her family. Join them as they prepare and celebrate in Lisa Bullard’s “Daniela’s Day of the Dead.”

• Cesar Chavez was a Mexican American civil rights activist who defended unions. He focused on better wages and working conditions for vineyards using nonviolent resistance. The story of his fight to improve the lives of farm workers is told in “Cesar Chavez: A Hero for Everyone” by Gary Soto.

• “I, Frida” by Amy Noesky and “Viva Frida!” by Yuyi Morales pay tribute to the artist Frida Kahlo. Amy Noesky’s book follows Frida as she explores San Francisco while her husband, painter Diego Rivera, creates a mural for the city. The artist biography by Yuyi Morales is insightful, providing background information that inspired Frida in her art and life.

• “Mario Molina: Chemist and Nobel Laureate,” by Deborah Kent and Michael Burgan, is a wonderful story for any budding scientist. This story introduces children to the scientist who pointed out the dangers that chlorofluorocarbons pose to our environment.

• Continuing the Blue Bloods series, Melissa de la Cruz’s “After Life” brings Schuyler back, who finds himself in an alternate reality where Lucifer is in charge. She finally meets an old friend from the real world. When he tells her she’s the only one who can fix things, Schuyler realizes she must destroy Lucifer once and for all.

• Two girls with the gift of seeing visions must use everything in their power to save themselves and their home in Lizz Huerta’s ‘The Lost Dreamer’.

• Is his father a genius or a psychopath? Silvia Moreno-Garcia’s “Doctor Moreau’s Daughter” tells the science fiction story from Carlota’s perspective. Living on a beautiful island with her scientist father, Carlota is surrounded by her experiences with half-human, half-animal beings. When the son of his father’s benefactor shows up unexpectedly, a disastrous series of events is set in motion.

• Angie Cruz’s “Dominicana” highlights Ana Cancion’s journey as she marries and moves to New York. Finding this new life unbearable, she decides to leave but is stopped by her brother-in-law. When her husband returns to the Dominican Republic, Ana’s brother-in-law helps her explore her new home. But when Juan returns, Ana must make a difficult decision between family and freedom.

• Her cousin’s pleas for help take Noemi to rural Mexico to unlock the dark secrets of a once influential family in Silvia Moreno-Garcia’s “Mexican-Gothic”.

• Set in South America, “Violeta” by Isabel Allende focuses on the life of a woman as she comes of age in the turmoil of the 20th century.

• Successful Manhattan wedding planner Olga and her politician brother survive the return of their mother, who abandoned them 27 years earlier. “Olga Dies Dreaming” by Xochitl Gonzalez looks at family ties and the American dream.

• Recounting her life from a childhood in the Bronx to an Associate Justice of the Supreme Court, Sonia Sotomayor’s “My Beloved World” inspires in the form of storytelling, hard work and dedication.

• Winner of an Oscar, a Grammy, a Tony and two Emmys, Rita Moreno broke down barriers and found fame. “Rita Moreno: a Memoir” chronicles her battle with typing, as well as her real-life struggles in marriage and motherhood.

The Manistee County Library proudly shares these titles and many more in print, digital, and audio. More information about titles, events, and branches is available online at manisteelibrary.org.