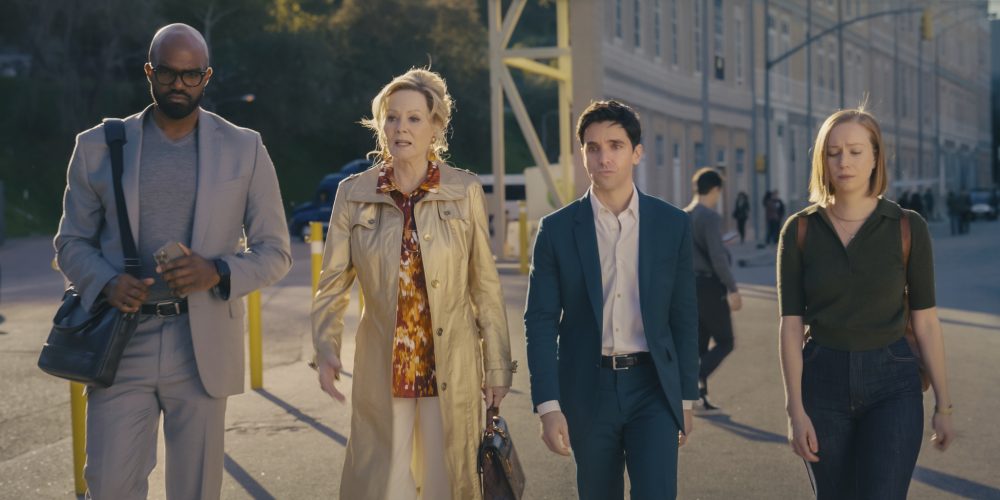 The second season of “Hacks” saw a costume change for Deborah Vance from Jean Smart and Ava from Hannah Einbinder. Costume designer Kathleen Felix-Hager used the storyline for the season which saw Deborah Vance on tour.

From a lesbian cruise to a state fair, Felix-Hager worked with Smart and the team to play wardrobe. Producer and writer Jen Statsky said, “We knew it was a fun opportunity to see Deborah like a fish out of water. It allowed us to have fun and play with the costumes.

The designer was able to gather feather dusters, silk tops and beaded dresses for Deborah’s wardrobe because she had early access to the script. However, there was one outfit Felix-Hager had in mind that almost didn’t pan out: the flamboyantly printed silk top she wears on the lesbian cruise.

Ava wears a lot of clothes that Statsky says she would have worn herself. “With her style, it really allowed us to go on this journey where we tell this story of Deborah and Ava through Ava’s wardrobe.”

Deborah goes to the state fair

This is an instance where Smart and Felix-Hager discussed Deborah’s outfit and whether adding a cowboy hat would tip Vance into comic book or caricature territory. . In the end, she didn’t wear the hat.

Felix-Hager used the surroundings as inspiration for Vance’s costume choice, which was a green overcoat with a bit of fringe. For her stand-up routine, Deborah wore an appliquéd denim jacket and cowboy boots. According to Felix-Hager, “She knows her audience and dresses for the occasion.”

Deborah leaves on a cruise ship in episode four. She thinks her audience this time around will be a boat full of gay men, except Marcus (Carl Clemons-Hopkins) accidentally books them for a lesbian cruise.

Felix-Hager was lucky enough to get scripts early on, so she knew the cruise episode was coming. She says, “I saw that blouse and duster early on and I knew I wanted her to wear it when she first boarded that cruise ship.”

The Casablanca silk outfit from the Art of Racing collection almost didn’t happen for legal reasons, as the top featured the Casablanca logo along the edging. Felix-Hager explains, “The legal department got involved because that impression was so distinctive. We had to have it cleaned. When the brand didn’t respond to emails, Felix-Hager had to find another route because blue and pink were perfect for Deborah. She says, “I wasn’t going to pass up on this outfit. I found the public relations person who represented the brand and called him. I begged them and they were ok. It was approved two days before we shot it.

Ava’s outfit complemented the outfit perfectly too. Felix-Hager notes that Ava had no idea she was going on a cruise. She says: “Ava’s outfit was based on what she would realistically bring with her on the road, and it was something that could translate to cruising. I thought that printed camp shirt with the jeans was awesome. The two walking ones are one of my favorite shots.

Felix-Hager loved Ava’s story. Earlier in the season, Deborah and Ava go to a department store and she buys him a whole new wardrobe including $800 loafers and an Alice + Olivia Chanel-esque plaid dress that’s much more formal than his usual casual polo shirts and jeans. The loafers were a change from the character’s Nike sneakers or the black and white Vans.

Tell Felix-Hager, “It was such a beautiful way to tell this story when Ava first saw the dress. She puts it on and her body language says, ‘I don’t even understand what’s going on here. But Deborah insists on buying everything from her.In this last episode, Ava appears in this dress and these moccasins, and she offers herself on a platter.

When Ava is fired, Felix-Hager says that moment became even more heartbreaking. In particular, in the locker room, Félix-Hager has put Easter eggs. “There are pieces in that dressing room hanging behind her that we incorporated into her wardrobe from episode five onwards and you see how she slowly begins to incorporate Deborah’s style into hers.”