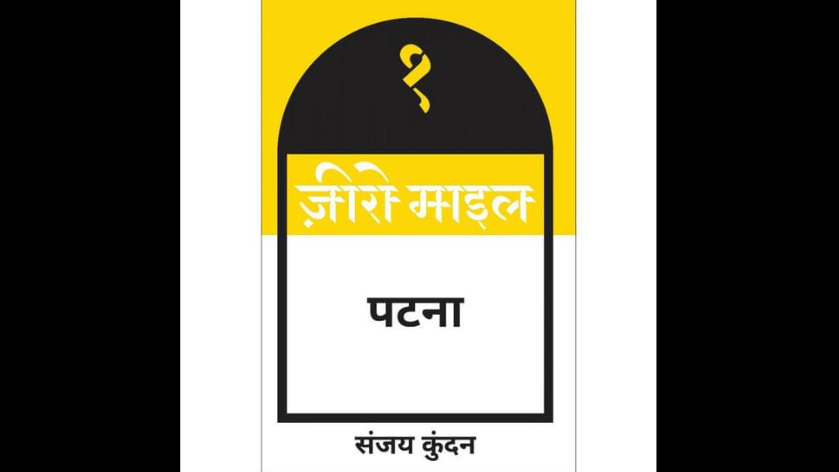 While working on my PhD, one of the biggest difficulties was finding relevant literature on the city of Patna in both fiction and non-fiction formats. Although the city over the previous decade had seen some notable writings, especially in Urdu, the practice declined, as did Patna. We have had occasional noteworthy writings by Arvind Das in his Republic of Bihar or Renu’s play about the 1970s Patna floods in Hindi.

In famous writers, social media, and publisher-sponsored books, we often overlook ordinary writings and expressions. The book Zero Mile, Patna by Sanjay Kundan is an indispensable addition to writing about the city in Hindi. Vaam Prakashan published it as part of his Lesser Written Towns of India series, which is a much needed and welcome addition. The author, poet and novelist lives in Delhi and writes about the city of Patna to reconnect in a way that he couldn’t connect with Delhi even after all these years.

Written in footnote form, it gives the reader a glimpse of Patna in its most mundane and rudimentary detail – something that will only make sense in its collective form. The format of the book is similarly structured, with small writings about people, places, festivals, functions and incidents. It sketches simple details of the everyday city of Patna in the 1970s and 1980s, mainly through the life of the ordinary person, through the author himself. It does the necessary in Hindi, a language that can adequately express and capture the city because the familiar can never be expressed enough in another language. For a foreigner, it holds a metaphor when the author remembers what they would call the cookie coming out of the local bakery as Danda biscuit, which has evolved into a rusk for the market over the years.

Zero Mile, Patna is not a profound work of literature nor a benchmark for literary writing. And yet, it is an important and relevant complement to the work done on Patna. The author helps us remember Patna’s ordinary sights, mornings and evenings and her daily commitment, which has always been a spatial extension of her rural affiliations and parochial ties. The author highlights the city’s various engagements with theatre, music and art and the neighborhood sites that have facilitated it. He remembers listening to great artists like Kumar Gandharv, Sitara Devi and Kishan Maharaj during the Durga Puja festival which was organized by different groups and which at one time was the culmination of organizing Durga Pujas in all the city. when people could switch from one music program to another all night long.

Lefebvre defines performance spaces as part of our everyday geography created by cultural practices and experiences, and the spatial and historical mapping of these is an important contribution of this book. The author writes and reflects on these cultural aspects of the city and how they shaped his formative years and those around him. He goes on to describe people who were government employees, doctors, lawyers and teachers and who were part of these cultural landscapes. The art form was not something separate to be performed by someone else in a defined space. It was there in the city.

From Durga Puja musical evenings to nukkad natak, theater and other forms of representation in Gandhi Maidan, it is an enriching account of what constituted the “urban” in the non-metropolitan cities of India. As the author describes, the man who sold small items to Gandhi Maidan was the best Qissago (storyteller) he has ever met. One also realizes the loss of Gandhi Maidan, open ground or lawn as it used to be called as a public space for fiery speeches to rest areas for those who had an overnight train to catch at the Patna junction. Today, it has transformed into a smart city project with the installation of LED TVs and barricades fully executing its idea of ​​public space.

From being able to notice the arrival of paneer and soup into our wedding dinners, to describing the various groups of performers coming together, and freeing the Premchand Rangshala from police encroachment, the narrative is all-encompassing. It makes you think about how much the material culture of our lives has changed and the market has invaded rudimentary practices. Therefore, in a world of commodification and materialistic concerns, the book is unwittingly a perfect ode to the city’s enduring social structures, which have not only occupied our lives and subsistence practices, but ensured its renewability.

It is now that we have awakened to terminologies such as the circular economy. Yet the author remembers when the wandering peddler in his Mohallah let him buy something his rate in exchange for an old notebook or used magazine.

Through his writings about the city, Kundan looks to himself to understand who he is and what made him the individual he has become, countless baithkis he frequented houses of masters, poets and artists. One could walk into someone’s house for a chat without a phone call or hosting protocol. He believes that these kinds of interactions and adda bazi makes Patna a pro-people city. Maybe that’s what the author should have done more of, in detail, and it’s in the last part of the book, describing the current city when the book loses its strength as it becomes sporadic and disconnected. Still, it is an important contribution to the sparsely populated world of Indian small and medium town literature.

Sheema Fatima is a Postdoctoral Fellow at Tata Institute of Social Sciences-University College India, UK. His research focuses on small and medium towns in Bihar.