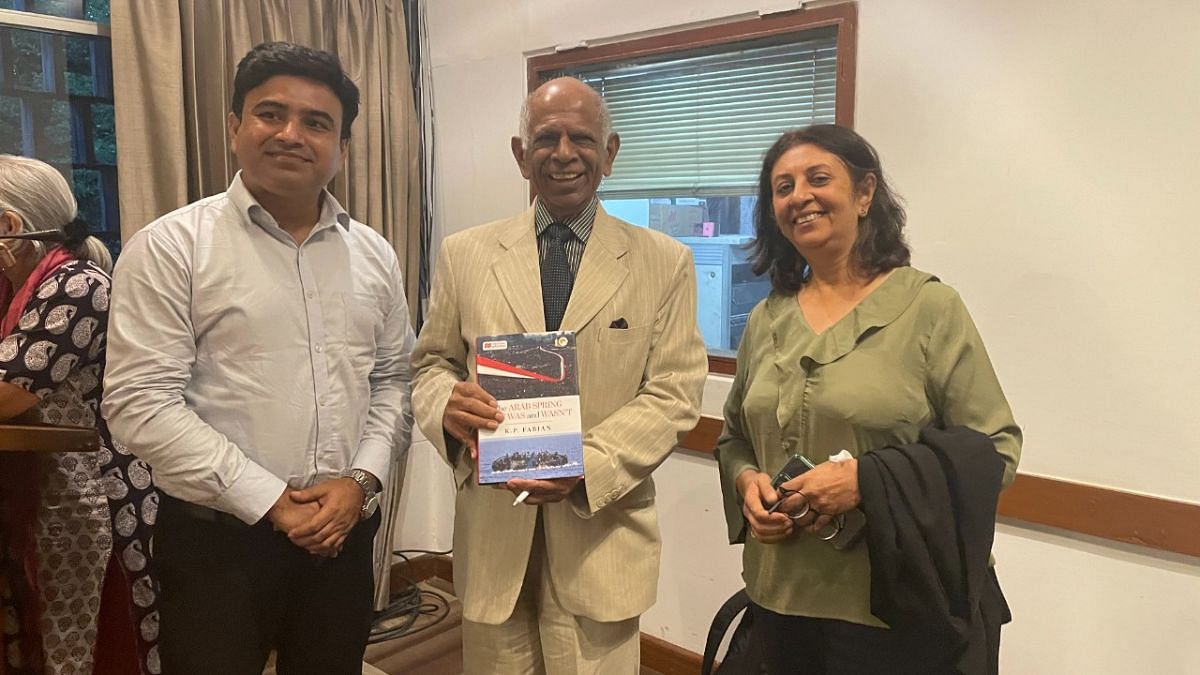 Oor is the series of uprisings of 2011 an Arab spring or an Islamic winter? The atmosphere of a discussion in New Delhi around KP Fabian’s new book, The Arab Spring that was and was not, reflects this question.

A professor and former Indian diplomat, Fabian began writing this book after Tunisia, pushed by a rebel peddler, first broke out in revolt in 2011. The Tunisian uprising had a domino effect and anti-government protests swept the Muslim world in what has come to be called the Arab Spring.

Making a remarkable allusion, Fabian said that just like Macbeth, “the Arab Spring is also an unscripted drama that is still going on”.

Former Diplomat and High Commissioner to Pakistan and Singapore, TCA Ambassador Raghavan and former Ambassador to Saudi Arabia Talmiz Ahmad were also present at the book launch at the India International Center on Wednesday.

Gulshan Dietl, a former professor of international studies at Jawaharlal Nehru University and moderator of the discussion, said the book takes us “into the midst of chaos”.

Due to the author’s experience in the region, she added: “KP Fabian was on the roads, watching the street protests. And since he was a diplomat, he also had access to all the council and decision rooms.

Calling the book “a broad overview of the whole region”, Raghavan gave the audience a perspective that was more central to the Indians. He said that although the Indo-Pacific is talked about a lot, we never really see the wider expanse of the Indian Ocean, which includes the oft-overlooked Persian Gulf.

Read also : The Arab Spring showed that autocracy is anything but stable

Ambassador Talmiz Ahmad recounted his experiences in Saudi Arabia with Fabian’s book. “Away from my home in Riyadh, there was a lot going on in Tunisia in December 2011. For 30 years in the region, I had no worries what was going on there. But all that changed when, in January, Tunisian Ben Ali was ousted and arrived in Jeddah.

“So, quickly, the Tunisians got rid of their problems. And the Arab Spring has become my problem,” he joked.

From the rise of populism, the Iranian-Saudi divide and US support for oppressive regimes, the consequences of the Arab Spring have been many. However, the one thing that stood out to Ahmad was “the erosion of US influence, credibility and authority”.

“Ignorance is the central feature of American involvement, sometimes for two decades in a particular region or country without any knowledge of the dynamics of that country. They sat there for 20 years and created nothing but waste and damage,” he added.

The public raised questions about resistance to democracy in Islamic states. The idea that democracy and Islam do not go hand in hand is something many people have come to believe. But Fabian thinks differently.

“Western thinkers are prejudiced against Islam. There are countries like Indonesia and Malaysia which are made up of Muslims but also very democratic. What appears to be the truth is that the West has blocked the entry of democracies into the Islamic world.

Taking another mockery at the West, Ahmad added: “Let’s not get carried away by the Islamic faith and the Arab people. My story differs. Resources are essential for Western economic repair after the world wars and economic dominance thereafter. It is this resource factor that has sustained Western imperialism.

But as Dietl quoted from Fabian’s book, the social reality of the Arab world is neither binary nor exclusive.

Cozy crime flourishes in the selection of summer thrillers